The carriage doors wheeze open and I wheel my bike down onto the platform with one hand. In the other I clasp the hand of Bertie, my two-year-old son, as he leaps off the train, smartly bending his knees on landing. The train lumbers away, leaving Church Fenton railway station deserted except for us. I had never heard of this small village in the Vale of York until a few days before, when Bertie had asked if we could see tractors at work in the harvest and, if possible, a combine harvester. A Google Maps satellite view scan of the environs of various railway stations had revealed this one to be surrounded by likely-looking arable fields, so here we were, on something of a wild goose chase.

It is two o’clock in the afternoon. The sky is free of cloud and the shadeless platform bakes. I lean the bike against a fence and get the suncream from the rucksack, preparing myself for Bertie’s customary howls of anguish at being subjected to such cruel torture. But he must be impressed by the exceptional blaze of the sun today, for he submits to the slathering with only melodramatic grimaces and snorts.

We cross the railway bridge and exit the station onto the road. I strap Bertie into the bike seat behind me, clip our cycle helmets on and we set off on our hunt. We pass the institutions of a traditional village; the Post Office and general store, the primary school, the village hall, a Church of England church (St Mary’s) and a Methodist chapel, a cricket club, a bowling club, two pubs. But despite these signs of a thriving community there is a hush to the empty streets, surely explained by the proportion of the population that make either the thirty-minute train commute to Leeds or the fifteen-minute one to York on a weekday such as this.

I glance up Northfield Lane as it passes on our left and turn into it on a hunch. It pays off: after a quarter of a mile the houses give out into fields, in which we find two tractors. One – the green John Deere – is at rest, its subsoiler raised behind it like a cocked and fanned tail; the other – the blue Ford – is at work, drilling seed. After watching the Ford for a while, a plume of dusty soil billowing from its discs, ploughs and harrows as it marches between the field’s headlands, we interrupt the John Deere driver’s lunch to see if we can glean a tip off regarding the whereabouts of any combines. He points to a large farm a mile and a quarter distant and speculates that ‘Sykes’ might – I put particular stress on the ‘might’ when relaying this to Bertie – be combining later in the afternoon.

After another admiring walk round his tractor as if we were prospective buyers, we head back into the village, where we attempt to find some cooling refreshments, first at the Fenton Flyer (not opening until five o’clock), then the White Horse (heavy curtains drawn) and finally at the Post Office, which we find had closed for the day an hour before. Bertie took this series of crushing disappointments better than I did, and instead of gulping down iced fruit juice and slurping ice creams, we sat on the shaded step of the shop and made the best of the clementine, raisins, rice cakes and water I had in the bag.

We saddle up again, crossing the railway line and turning off-road up Sandwath Lane, through a copse of ash, hazel, oak and hawthorn. We chalk up another tractor – a light-green Claas – at Tank Houses, where fencers are airgunning rails to posts in a newly-landscaped garden.

We come to ‘Sykes’s’. It is North Milford Grange, a vast complex of a farm set back from our track, with plenty of hanger-sized barns in which combines could be lurking. But the farm is silent; for Bertie these summer behemoths are destined to remain mythical beasts in picture books for another year.

We cycle a little way beyond the farm, past a spinney of whispering black poplars towering over a fifty-acre field of sugar beet, which appears to be being weeded by hand by a line of distant figures. Electric blue TransPennine Express trains skim across the parched landscape like kingfishers. Swallows jostle one another on the telegraph wires and a charm of goldfinches rolls along the hedges of field maple and ripening elderberries.

After being passed by another Ford tractor, and before heading back to the railway station, we lean the bike against an oak and get up close to a field of wheat. I pick an ear, rub it between my hands to separate the grains, then crush one with my thumb nail to show Bertie its bleached interior. Nonplussed by my attempt to connect this to what he helps weigh out at home when baking cakes, he enters the field and pretends to be the harvester that has eluded us. I sit and watch his auburn head bob along above the wheat’s golden ears, his reel and cutter bar arms industriously revolving in front of him.

I breathe the achingly familiar scent of the August arable landscape, transported back to my Essex childhood, and the two harvests over twenty years ago in which I was the John Deere tractor driver, working through until twilight to help bring the harvest in. I am suddenly struck that no matter how deep my affinity – kindled when I was ten years old – for the uplands of northern England, nor how deep the roots grow that I have been sinking into the peaty Pennine soil for the past eight years, I am ultimately of the loam and clay lowlands. But for Bertie this has been an excursion to an unfamiliar – and gratifyingly tractor-rich, if combine-poor – countryside. For him, as our train passes from the open aureate plain into the deep green shade of our Pennine valley, we are truly going home.

I wrote the above piece in August 2016. Two years later, we returned to Church Fenton. This time, we struck it lucky to an almost unreasonable degree. As soon as we crossed the railway bridge, we spotted the telltale dust of a working combine, a mile or so distant. We mounted the bike and hunted it down. As Bertie waved at it from the field edge, I considered the mission accomplished.

But then the driver – Carl, a contractor – sounded the horn, stopped, opened the cab door and beckoned us up. We rode up and down the field with him for 20 minutes.

Our astonishing luck at finding such a friendly driver was repeated later in the day, when we followed the hum of another combine to again have the friendly driver – this time Adam from North Milford Grange – invite us up into the cab for a ride. 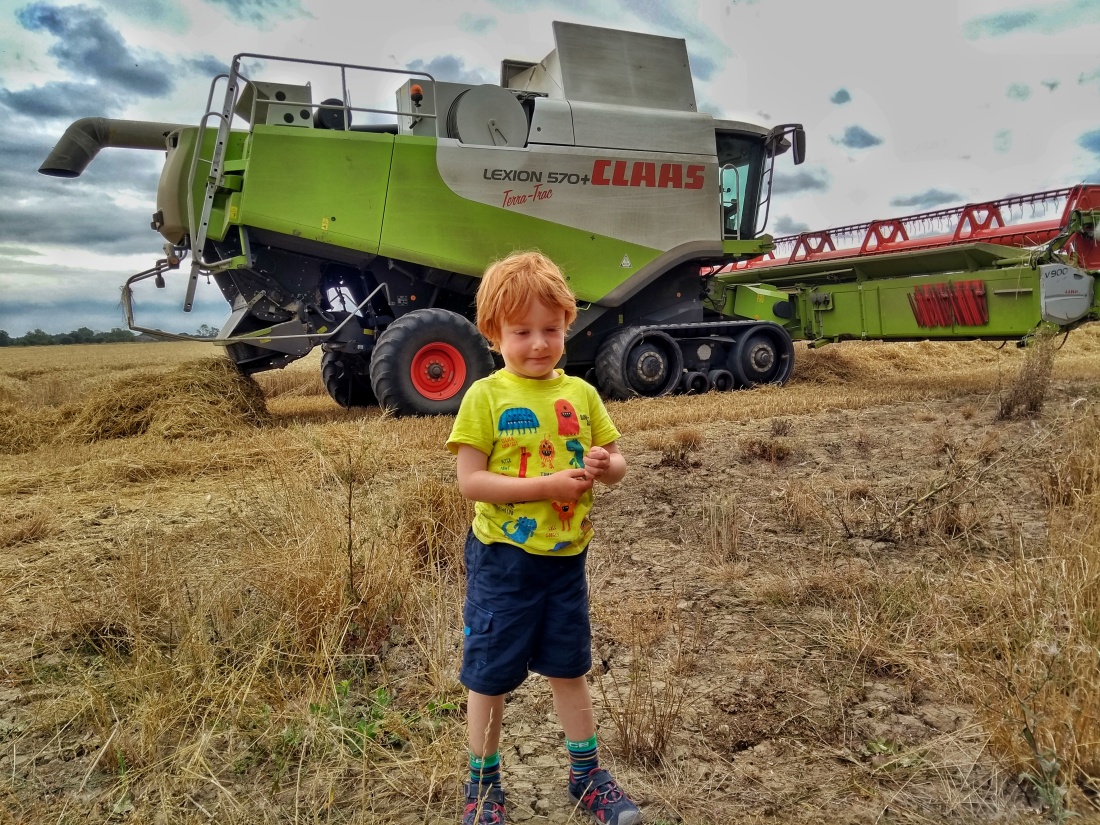 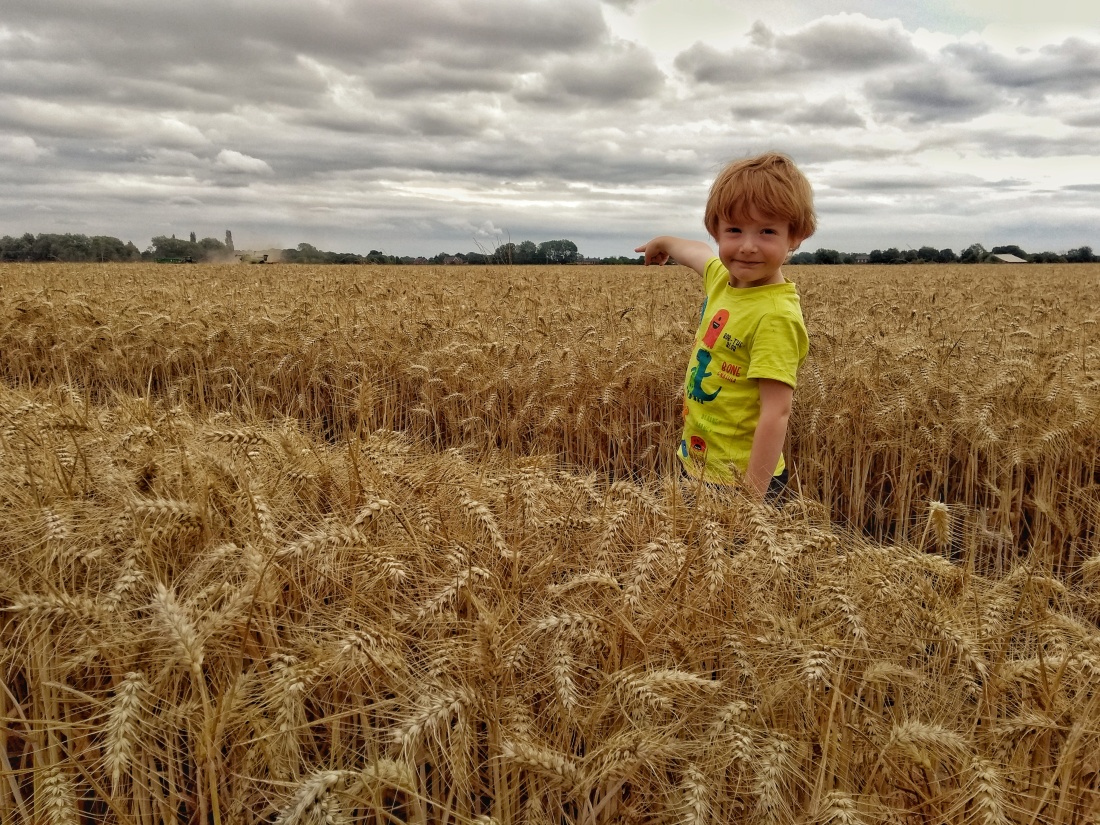 And after two combine rides did we really need the Flying Scotsman to serendipitously arrive at Church Fenton station and spend half an hour there for us to admire? Not really, but we enjoyed it anyway.