I step out of the cottage just as the sun disappears behind Dodd Fell. I ascend quickly on footpaths through the sheep pastures, chasing the leading edge of Dodd Fell’s vast shadow up the flanks of its neighbour, Wether Fell, in an attempt to enjoy a few more moments of sun on what has been the warmest of November days. After a short while I stop and concede that I will not catch it. Turning around I look across to the silhouetted bulks of Dodd Fell and Widdale Fell. Such is the angle of the setting sun in relation to these two shadowed masses that the gulf of Widdale between them is filled with light, the air itself bronzed. Below me, in immediate response to the cooling of the shaded air, the pastures and meadows of Wensleydale exhale mist. It gathers in drifts against the drystone walls then overtops them, and within a short time forms a shallow, valley-length glacier, through which the tower of St. Margaret’s Church in the market town of Hawes below me projects. Across on the northern side of the valley, Stags Fell and the sleeping lion of Great Shunner Fell still bask in the late sunlight I was chasing. 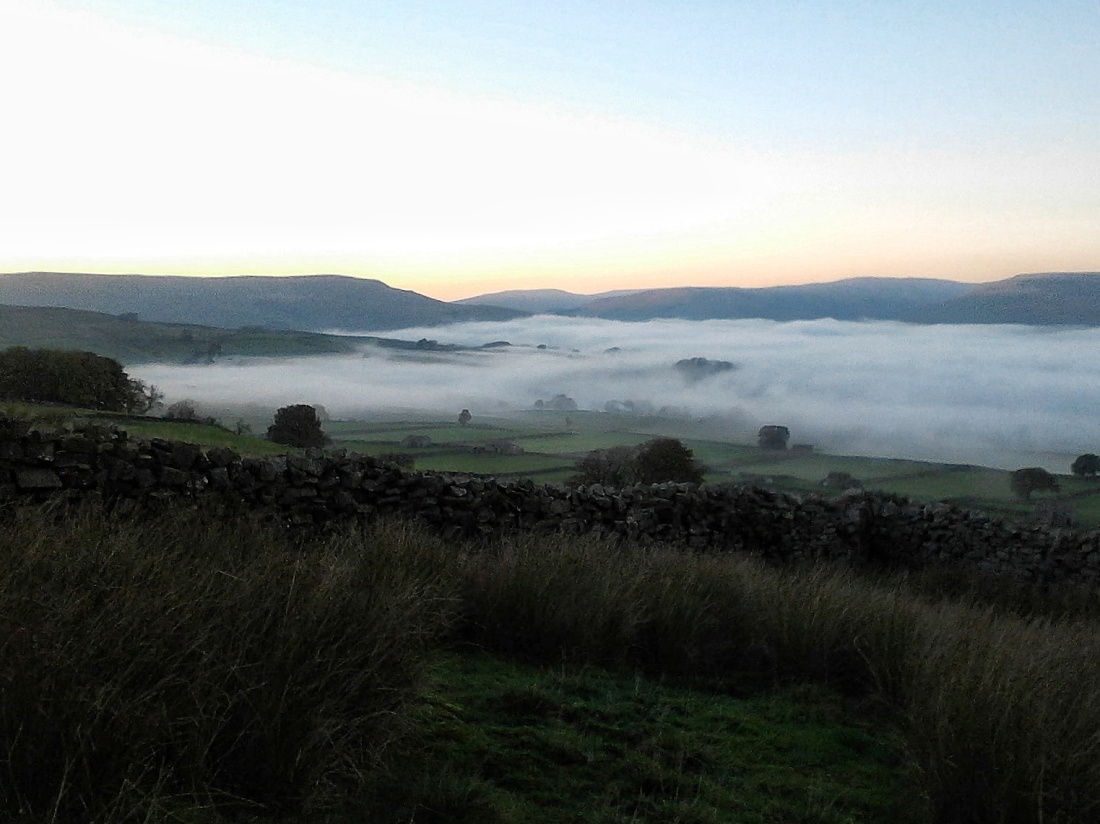 I pass between field barns as I walk up a high-walled lane, insects rising from the rank grasses as I pass. A hundred-strong flock of jackdaws swirl out of the sycamores around East Shaw Farm, whose farmhouse windows reflect the pale northern sky like blank eyes. The lane jinks left, and at the corner I have to duck under the loping, seed-heavy branches of an ancient ash. The fields through which I have passed have been a lush and fertilised green and the walls well-tended, but now, on the other side of a gate just beyond the ash, I enter much rougher, scrubbier, muted-green and sedge-brown pastures with walls long abandoned. Before I contour up the hill on an old quarry track, I stand to admire the improvisation of an unknown farmer who, years ago, plugged a gap in the wall by bracing an ornate iron bed head against a wizened rowan. Snagged in wire beneath it are the ragged and sodden remains of a hare; stomach, jawbone and a single ear, pert, as if still listening for predators.

I walk on and up, passing a crouched and wind-blasted hawthorn with trunks that twine around one another. I come to a line of small quarries, probably worked out in the 19th century. A remarkable rowan grows out of the escarpment, the stages and sagas of its life on display in its many stems, with trunks that have grown out to the north and attempted to arch back to the south but collapsed, shoots re-growing out of it along its length only to be browsed to stubby dead ends by generations of cattle and sheep.

I leave the quarry and climb higher on paths indistinct amongst the sedges. Behind me, the shadow of Wether Fell climbs higher on the northern valley side, intensifying the colour of the remaining sunlit fields. Further down the valley, above the village of Askrigg, a tongue of ice-mist leaves the main glacier to quest up the wooded Whitfield Gill towards the moor.

I arrive at Blackburn Sike, whose ravine has afforded protection from the sheep to a hawthorn, a hazel, rowans and a shaggy larch, all decrepit. I follow the stream up to an expansive shelf of land beneath the final formidable slopes of Wether Fell. I stop and look down to the empty fields of Bainbridge Ings campsite, where I first stayed in this valley, camping with my dad, 25 years ago. I become aware of the honking of geese, and look up to Yorburgh, a small subsidiary summit of Wether Fell. Far above and beyond it, in the grey-blue sky, a magnificent skein is making my way. It is a shallow arc, and it writhes like a long rope that has been jerked at one end, the ripple moving along its length as each bird adjusts itself in relation to the one in front. As it approaches, the skein loses its shape and the calls become louder as they berate one another for the ill-discipline. As they pass directly overhead they regain their shape and become quiet, their now impressively sharp arrow-tip leading them straight into the sunset. I watch them cross Sleddale and Widdale until they fade from sight and hearing into the lemon yellow sky.

The last of the sunlight lifts from the summit of Lovely Seat to the north, and without the contrast the mist-glacier becomes blue and the valley pastures above it blue-green. I give in to the urge to go higher as the twilight deepens. The twilight hour is apt for the exploration of upland landscapes such as this in an attempt to understand them, standing as they do in their own twilight, ever on the margins between domestication and the encroaching wildness, and between the thriving heyday of their past and an uncertain future. These explorations are always curtailed by the night, just as my attempts at understanding these landscapes are compromised by my lack of deep connection to them. But I continue upwards nonetheless, until the charcoal-blue of the eastern night has overtaken me and is bearing down on the sun’s afterglow. 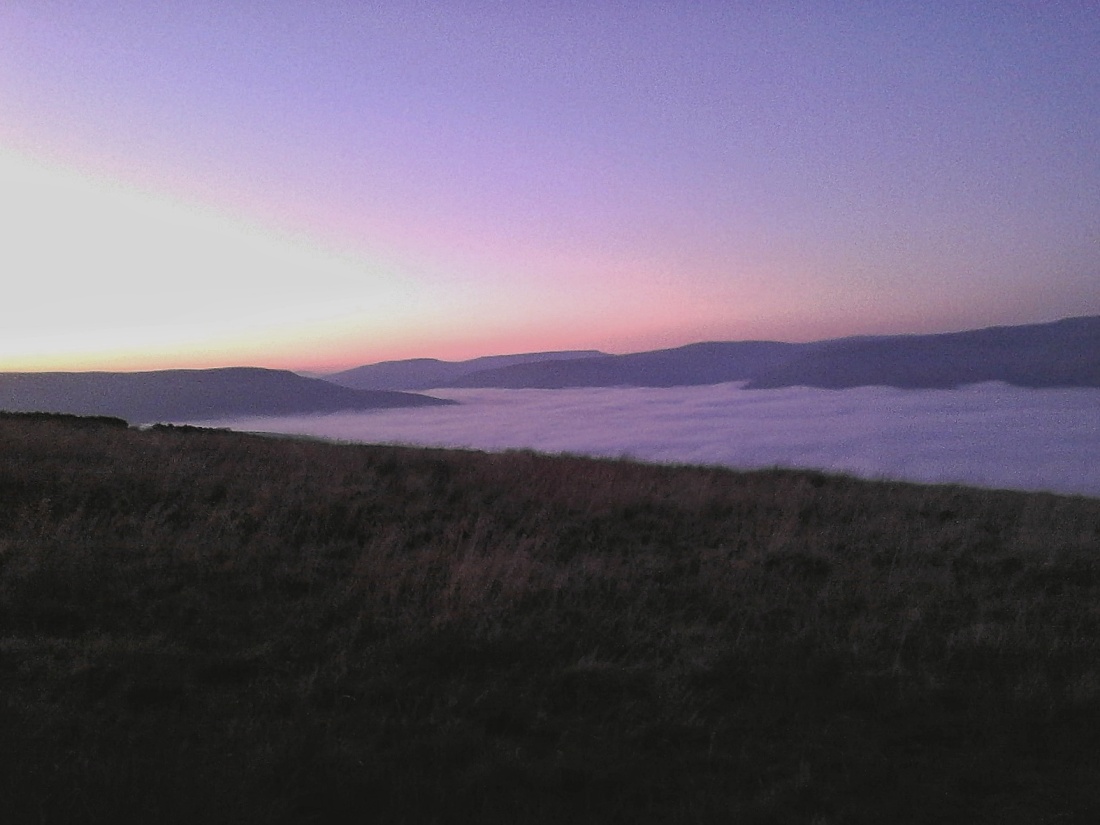 I stumble down, guessing my way to the stiles across the dark fields, until I plunge into the mist as I reach the ash tree. Skylines are smudged and the stars that have been sown are snuffed out. In the field beside the walled lane a farmer whistles and shouts to his dogs as he gathers sheep. I can see nothing of them through the mist, even though their thundering hooves pass close by. I descend the last steep field above the village of Gayle, where I am staying. Its lights emerge beneath me, in pools, like a submerged village whose residents refused to evacuate before the valley was flooded.

Originally published as part of 24,000 Words alongside twelve pieces by my friend Michael Rush.