It is ten o’clock in the morning and Clare, my wife, and Bertie, my two and a half year old son, are walking along Kilnshaw Lane amongst the high pastures of the parish of Erringden. The misted air is cool, but the sun is issuing a promise to break through before we reach our destination, Stoodley Pike, a 120-foot stone obelisk perched on the crest of Langfield Moor.

We come to the early 19th century Erringden Grange Farm on the north side of the track. Its enormous outbuildings are empty, their stone slate roofs rippled as if having been subject to an earthquake. We walk through the thick scent of a honeysuckle that leans over the garden wall as if to engage passers by in conversation. Swallows fly among towering ash trees, and underneath them crouch decrepit hawthorns, their trunks swaddled in snagged sheep wool. Both the ash and the hawthorns are substantially behind their conspecifics lower down in the valley. Above us the ash are only just coming into leaf, while those in the valley are lime green. And these hawthorns are only now unclenching their tightly wrapped white flower petals, but those I can distantly see down on the Eastwood hillside are fully in bloom, seeming to be encrusted with glittering hoar frost.

Clare, with Bertie on her back in the sling, have moved ahead of me. Bertie calls to me to come and look at something interesting they have found; a verge of flowering meadow foxtails. Clare leans over for Bertie to bat one, and a wisp of golden pollen floats off on the breeze. 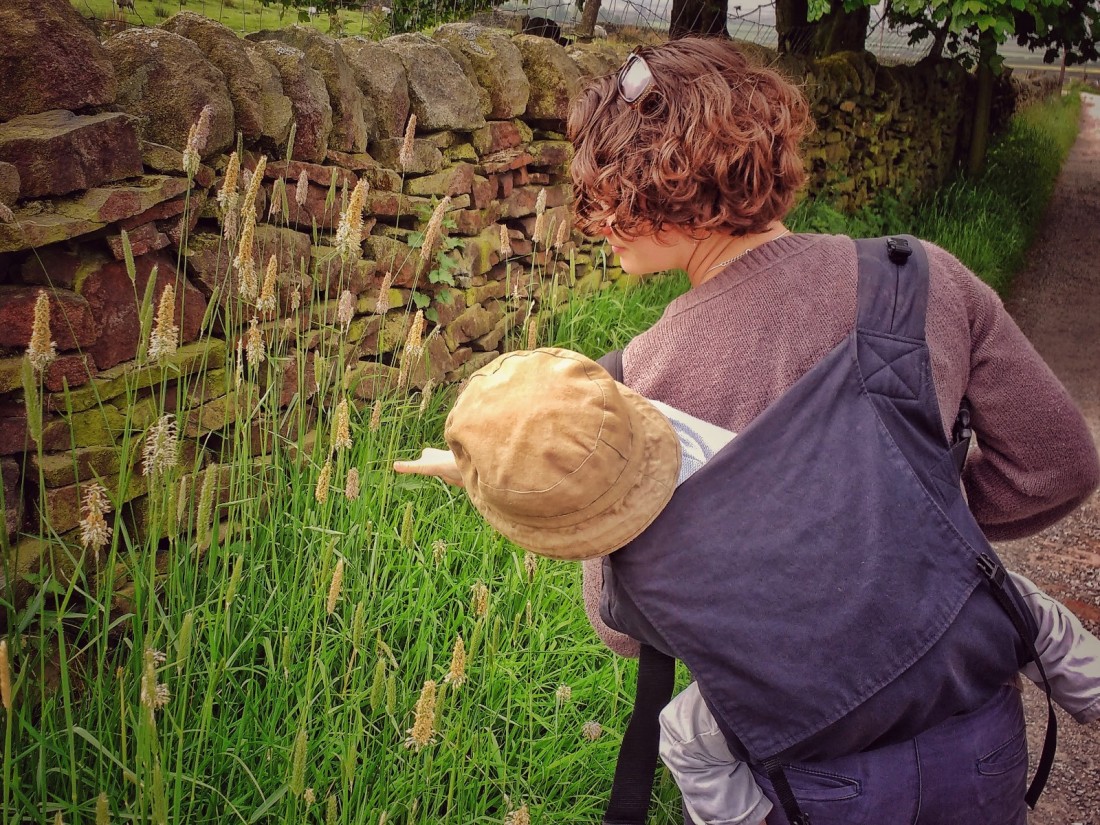 The mist is clearing, with smudges of blue sky soaking into the whiteness. The defined base of the mist is also rising, revealing for the first time the lower plinth of Stoodley Pike. As we approach it the mist rises further, disclosing the balcony, 40 feet above the ground, and, slowly, from base to tapering point, the 80 foot obelisk that rises from the balcony. It is as if we are there in 1856, watching it being built.

The emerging sun ignites the white phosphorescence of the flowering cotton grass that surrounds an abandoned barn above Swillington Farm, and brings out the buttercup yellow of the pastures, from the nearest of which a pair of calling curlew rise. 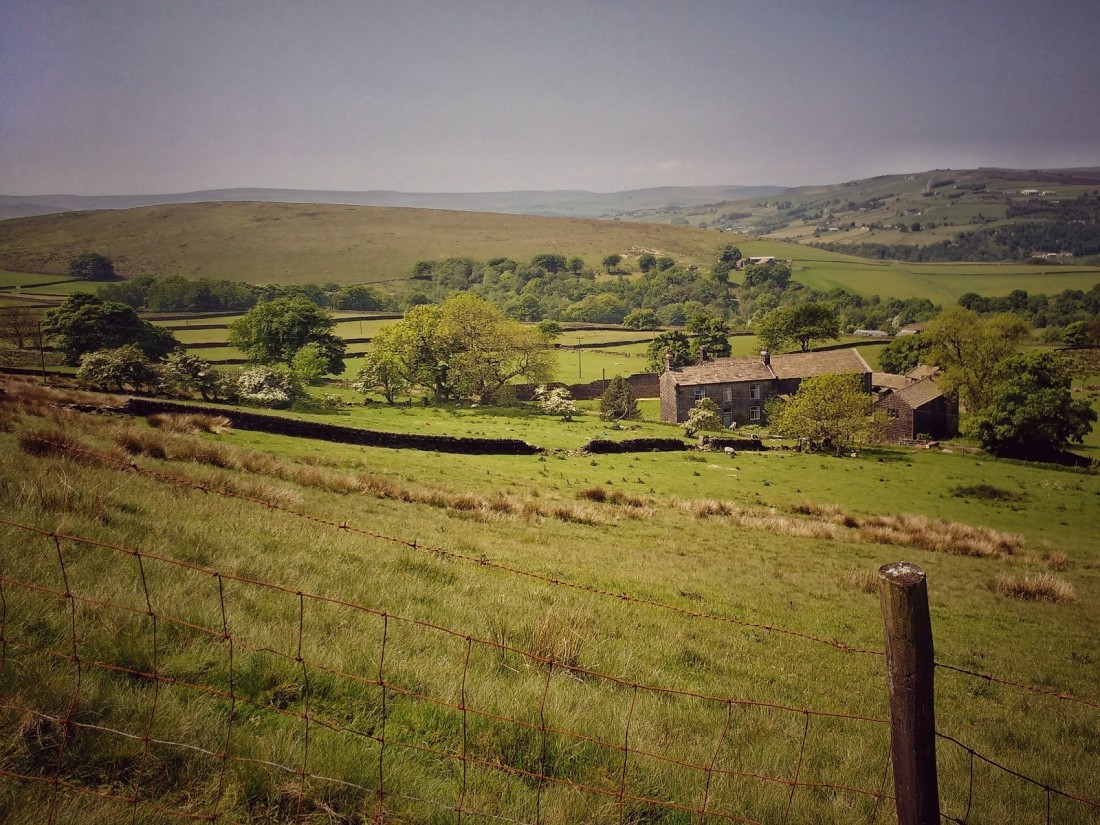 As we leave the lane and strike out uphill, Bertie belatedly informs us that he didn’t like the swishing tails of the cattle we passed by Kershaw Farm. After reassuring him that we won’t see them again on the walk, he then asks what seems to me like a planted question to my geography lecturer wife; where does the water that gurgles down a drainage ditch beside the path come from? Clare delivers a digest of her first year lecture on the hydrological cycle. Bertie repeats the essence of it back to us, pulling Clare off balance as he enthusiastically points to the sky, the hill, the drain and the distant sea. Clare concludes that his grasp of the main points exceeds that of many of her first year students. To mask the fact that I have nothing to contribute to enhance his knowledge on this topic, I pluck a head of cotton grass and tickle him under his chin, his hysterics and attempted evasions further unsteadying Clare on the rocky path.

After crossing the last dry stone wall we let Bertie loose from the sling onto the open Langfield Moor. I set him on a hunt for a spring that most walkers probably miss on their charge to the summit. He gamely sets off on the search. I have often had trouble re-locating it, but he soon spots something strange amidst the scattered stones and leads us to it. He is enchanted by the little constructed stone tunnel that the spring emerges from, and the carved trough into which it spills and then overflows to disappear again into the moor. We spend some time there; he swirls his hands in the cold water, and launches little rush stems into the trough so they can be sucked to the overflow and plummet down its miniature waterfall. He finds the earlier answers to his questions about where the water comes from (further up the hill; I can see him thinking, ‘But there is almost no more hill above us!’) and where it goes to (down the hill; I can see him thinking, ‘But it disappears into the hill!’) understandably unsatisfactory, and he is reluctant to leave these unresolved mysteries. 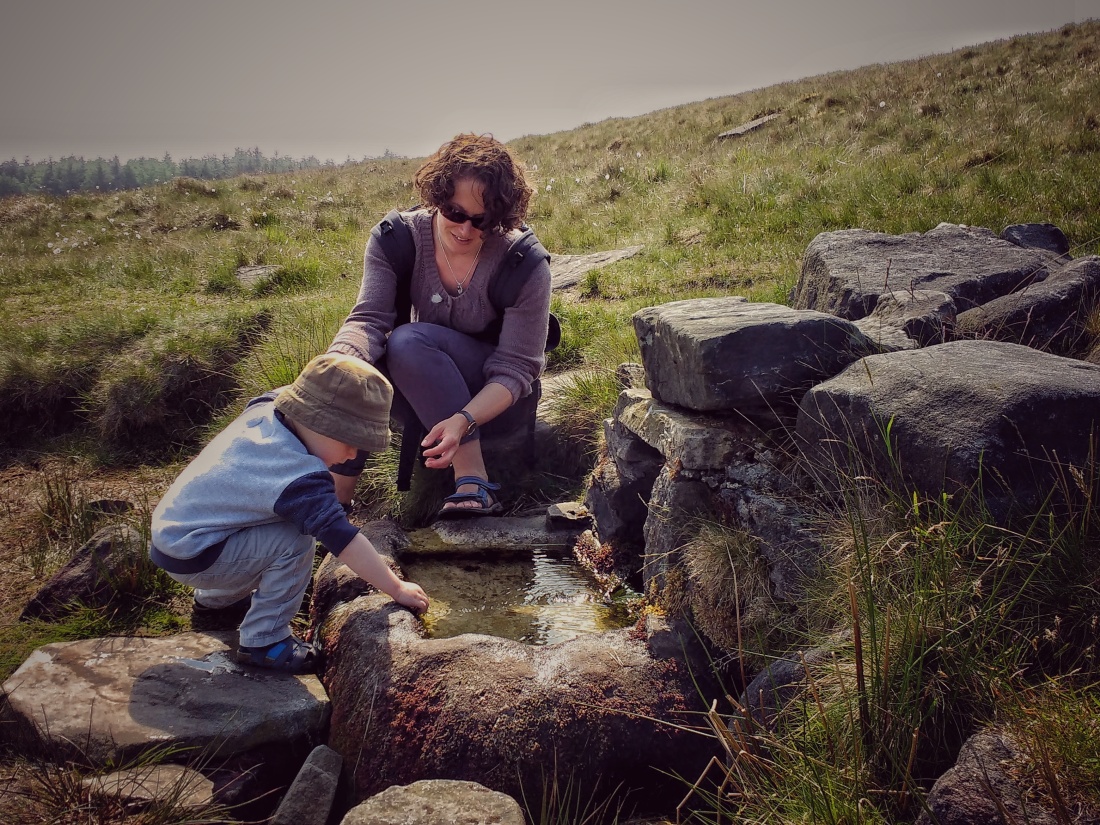 We tempt him the last few hundred yards with the promise of the banana and chocolate cake that he helped bake yesterday, but then cruelly make him go up the monument first before the large group we can see approaching across the moor arrives. This is the second Stoodley Pike monument. The first was erected to celebrate the end of the Napoleonic Wars in 1815, but having already been struck by lightning it collapsed on February 8th 1854, which by coincidence was the day the Russian Ambassador left London before Britain declared war with Russia and entered the Crimean War. This second monument was erected in 1856 when peace was proclaimed.

The balcony is reached, happily for Buchan fans, by 39 steps, some of which must be navigated in total darkness. Bertie is less interested in the stunning views across the layered moors to the Peak District than in spotting the tractors that are mowing the hay meadows across the valley.

After gorging on the promised cake, we walk back down the moor and along the ridge above Kilnshaw Lane. Eventually he climbs back into the sling and falls asleep as we descend lanes frothing with cow parsley and fringed with the rose-pink spikes of bistort.

Since I wrote this piece in 2016, the path to Stoodley Pike has been realigned to take walkers straight past the hitherto-elusive little spring and stone trough, and the trough itself has been enclosed by some new stonework which needs a little weathering.